Healing from the Inside Out 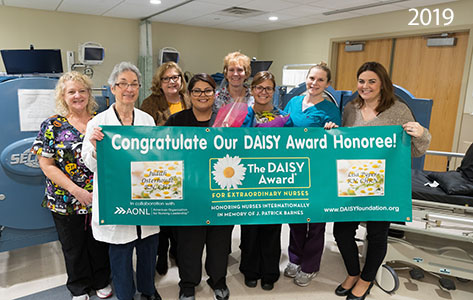 Life on a farm can be exhausting. Handling the chores, tending to the animals, and keeping everything and everyone going takes a certain kind of toughness. And Chick Parr, 63, knows just what that’s like. “I take care of the farm machinery, I lift heavy bales of hay, and enjoy feeding the animals,” she says of her 75-acre family farm. “It’s hard work, but it’s work that I love.”

Five years ago, Chick was diagnosed with breast cancer. Her treatment included a mastectomy and radiation. But, the radiation she received caused tissue damage, resulting in a wound that would not heal, even after multiple surgeries and years of doctor visits. She had never been a “sit around kind of person,” Chick says, but this injury made it much harder to keep up with her active lifestyle.

Last spring, Chick was referred to the Newton Medical Center’s Wound Healing Department, where she connected with Rosario Manalo, MD, and Rebecca Marsh, MD. Their collaboration led to a treatment plan for Chick that consisted of wound care and hyperbaric oxygen therapy.

Hyperbaric oxygen therapy (HBOT) delivers oxygen to damaged tissue, which can improve the healing process. HBOT can be beneficial in treating bone infections, diabetic ulcers and wounds created from radiation oncology treatments, like Chick’s. Most HBOT treatment plans are 30 to 60 treatments, taking around two hours per treatment. Chick’s deep wound required 60 treatments, requiring her to come to the Newton Medical Center’s Wound Healing Department and Hyperbaric Oxygen Center for 12 weeks during the summer of 2019.

Chick knew she was in good hands from her first visit to Newton Medical Center. “Every one of the doctors and nurses are great. The trip and appointments took half my day, but was worth every moment,” she says. “It became something I looked forward to, because they were like a family. Their positive outlook changed my life.”

Chick is especially thankful for her two hyperbaric nurses, Lisa Pyper, CHRN, and Judith Osterhoudt, RN, whom she credits for such a life-changing experience. She nominated both for a DAISY Award, an international recognition program that honors and celebrates the skillful, compassionate care nurses provide every day.

“Lisa and Judith’s care and compassion for me can never be forgotten in my lifetime,” she says. “If they treat everyone as they treated me, there are a lot of lucky patients to have them for their care.”

Chick’s wound was healed at the completion of her wound care and hyperbaric oxygen therapy treatment plan. In addition, she made another important milestone … she’s five years from her cancer diagnosis and remains cancer-free.

About the Daisy Award® for Extraordinary Nurses

The DAISY (Diseases Attacking the Immune System) Award is an international recognition program that honors and celebrates the skillful, compassionate care nurses provide every day. The DAISY Foundation was established by the family of J. Patrick Barnes after he died from complications of the autoimmune disease ITP in 1999. During his hospitalization, they deeply appreciated the care and compassion shown to Patrick and his entire family. When he died, they felt compelled to say “thank you” to nurses in a very public way. Nurses are nominated by anyone in the organization – patients, family members, other nurses, physicians, other clinicians and staff – anyone who experiences or observes extraordinary, compassionate care being provided by a nurse. Through this, we honor the superhuman work nurses do for patients and families every day.