People with atrial fibrillation (AFib) are five times more likely to have a stroke than the average person. 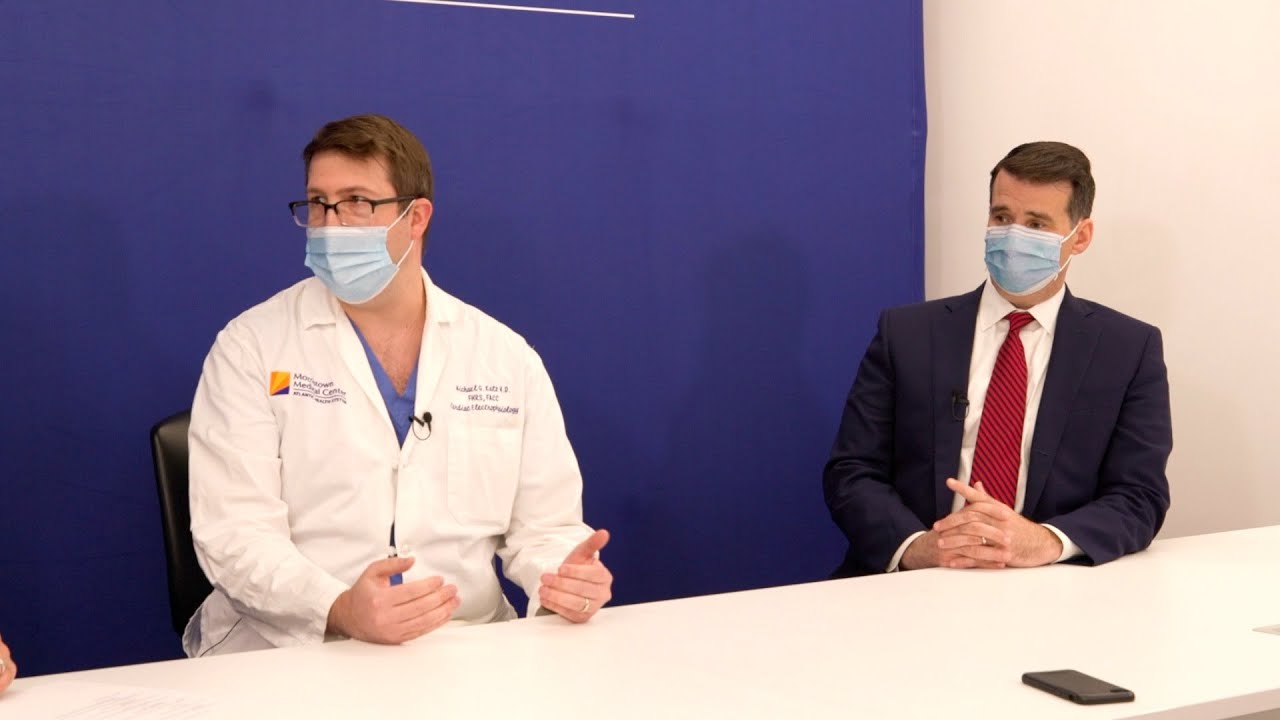 Atlantic Medical Group cardiologists Timothy Mahoney, MD, and Michael Katz, MD, answered questions on managing atrial fibrillation, an abnormal rhythm that starts in the upper chamber of the heart, and reducing stroke risk during a Community Conversation via Facebook Live on May 11, 2021.

What is atrial fibrillation (AFib)?

The heart coordinates blood flow and responds to our body's needs with electrical stimulation, Dr. Mahoney explained. Atrial fibrillation occurs when the electrical system no longer provides the heart with a rhythmic, or regular, beat.

“Atrial fibrillation is the heart short-circuiting in a way that can affect the heart’s function, how the patient feels, and can cause issues with clotting and stroke,” said Dr. Mahoney.

What are the consequences of atrial fibrillation?

According to Dr. Mahoney, atrial fibrillation has three main consequences:

Sign up to receive news and updates about our Community Conversations. This form is for North American residents only.

How common is atrial fibrillation?

Atrial fibrillation is a very common condition and awareness of AFib is growing. AFib occurs more frequently as people age, Dr. Katz explained, particularly in people between age 60 and 80.

Does every patient who has atrial fibrillation have a stroke?

Dr. Mahoney said that, while not everyone who has AFib will suffer a stroke, atrial fibrillation does make the chance of stroke more likely. In fact, patients with AFib are about five times more likely than the average person to have a stroke. In addition, strokes in patients with AFib are not only more frequent than in the general population, but they tend to be more severe.

“In their lifetime, about one third of people who have been diagnosed with AFib will have a stroke, if not treated appropriately with anticoagulant (blood thinning) medications. So AFib is a major cause of stroke and any patient with AFib needs medical attention to decrease the risk of stroke.”

Dr. Katz added that it is important to develop a relationship with a doctor who is aware of your risk factors, including age, gender, a history of high blood pressure, a history of heart failure or reduced heart squeezing function, and a history of vascular disease or heart attack. Find a doctor >

Are genetics and family background tied to atrial fibrillation?

Research is being conducted to determine if there is a connection between genetics and AFib, Dr. Katz pointed out.

“Right now, we're just in the infancy and initial stages of genetic tests to actually look at predisposing factors. But we hope in the future that genetic testing will guide therapy in the same way that it's guided therapy for other ailments as well.”

How is atrial fibrillation treated?

Dr. Mahoney re-emphasized the importance of developing a relationship with a primary care doctor or a cardiologist.

To treat AFib, doctors approach the condition in three ways:

Dr. Mahoney said that with appropriate medications, such as blood thinners, risk of stroke decreases dramatically to under 1% annually.

What are blood thinners and how do they work?

Anticoagulants, or more commonly known as blood thinners, are medications taken on a routine basis to prevent clot formation.

Dr. Katz said that, historically, the most common blood thinner prescribed was Warfarin, which required laboratory testing to make sure it was adequately thinning the blood and was prescribed with the right dosage.

Today, there are medications that require less laboratory testing, and have less interaction with food. Dr. Katz stressed that all blood thinners need to be prescribed under the supervision of a physician.

If you're being treated for AFib with blood thinners, and you suspect you may be having a heart attack, can you take aspirin while waiting for first responders to arrive?

Both doctors stressed that the most important thing to do if you suspect you are having a heart attack is to seek immediate emergency care.

Dr. Katz said that many patients are prescribed low-dose aspirin in addition to a systemic blood thinner.

“The short answer is, if you suspect that there may be a heart attack going on, there shouldn’t be any problem (taking aspirin).”

The relationship between AFib, diet and lifestyle is an emerging area of research and interest, according to Dr. Katz.

In general, we know that weight loss can be tremendously important for people who are struggling with obesity, he stated.

“We know that sustained weight loss and a reduction in BMI can reduce the incidence of atrial fibrillation and also its symptomatic manifestations.”

Cardiologists, primary care doctors and even specialists like bariatric surgeons, in some cases, partner to assist patients on that journey.

“However, you have to underscore the point that even if you become a world-class athlete, you may still develop AFib and need to very carefully follow up with your physician.”

Are all patients able to take blood thinners to manage their risk of stroke with atrial fibrillation?

Dr. Mahoney said that between 80% and 90% of people can take blood thinners, but there is a segment of the population, as they grow older, who are at risk of bleeding or injury from falls, which can lead to bleeding. These risks may outweigh the benefit of blood thinners.

However, there are other ways of managing the risk of stroke. The most common tool in use today is a tiny implanted device called the WATCHMANTM. This device seals off the area of the left atrium where blood tends to pool. Dr. Mahoney said that Morristown Medical Center has placed more than 100 of these devices with a simple puncture in the vein. Patients who have the device implanted are able to return home the next day.

If successfully placed, 95% to 99% of the time, patients who cannot tolerate blood thinners can rely on this alternative.

What is an ablation and how can it reduce the risk of a stroke without blood thinners?

An ablation is a therapy used to maintain rhythm to control heart rate. Dr. Katz explained that it is a catheter-based procedure performed in an operating room.

Even after ablation, regardless of how well they do, patients may still need to stay on blood thinners, Dr. Mahoney added. The reason for ablation is to treat symptoms, not to stop the use of a blood thinner.

One’s future risk of stroke is guided by other factors, including congestive heart failure, hypertension, age, diabetes and prior history of stroke. Dr. Katz mentioned the CHADS-VASc score, which measures those risk factors. He emphasized the need to consult with an electrophysiologist or a cardiologist on the risks and benefits of ongoing use of blood thinners.

Dr. Katz explained both conditions are early beats of the heart that often produce no symptoms or recognizable sensations.

“But some people feel them, and they can be distressing, particularly if you don’t know what they are. There is a standard workup and evaluation, which usually begins with your primary care doctor or cardiologist.”

He added that these premature beats are generally not related to AFib.

“If someone has a structurally normal heart and there are sporadic premature beats, both from the atrium for the ventricles, these ... are not necessarily related to the development of either atrial fibrillation or more dangerous rhythms from the lower chamber of the heart.”

Are SVT and atrial fibrillation related?

Supraventricular tachycardia (SVT) is a term that, in the past, was used to describe any fast rhythm in the upper chambers of the heart. Atrial fibrillation was categorized as a type of SVT. Dr. Mahoney said that today the terminology has changed.

“They’re thought of in two different ways. Whereas atrial fibrillation is complete electrical chaos, SVT is a repetitive mechanism where the heart goes fast. SVT typically doesn’t have the associated risks of stroke. It is very rarely a cause of secondary phenomenon, such as the heart function going down. So, they’re both upper chamber arrhythmias, but SVT is a completely different mechanism.”

Is there a relationship between AFib and a leaky heart valve?

Dr. Katz agreed that there could be a relationship. He explained that a leaky heart valve, such as mitral valve, that divides the left upper chamber and the left lower chamber, can cause regurgitation, or a backflow of blood in the wrong direction. Over time, if the blood is flowing in the wrong way, the chamber size may start to enlarge, causing pressure, scarring or changes in the muscular tissue of the heart. Potentially, there may be the development of heart rhythm problems as a consequence. This is a rare cause of atrial fibrillation.

What are the risks, if any, of antiarrhythmic drugs for treating persistent atrial fibrillation?

Dr. Mahoney explained that antiarrhythmic drugs are used to control the symptoms of atrial fibrillation.

“We’re trying to reset the heart with medications. So, if you think about atrial fibrillation as a muscle twitch, what the medications are trying to do is stop the heart from twitching or causing atrial fibrillation. There are a lot of problems with antiarrhythmics long-term; including that some of them could cause very slow heart rates, some can cause nausea, and (in rare cases) can cause deadly arrhythmias. So, when choosing an antiarrhythmic, this has to be done very carefully (in consultation with a cardiologist and an electrophysiologist).”

He added that there’s more data to suggest that ablation is more effective than antiarrhythmics for some patients.

Where can I find more information on atrial fibrillation?