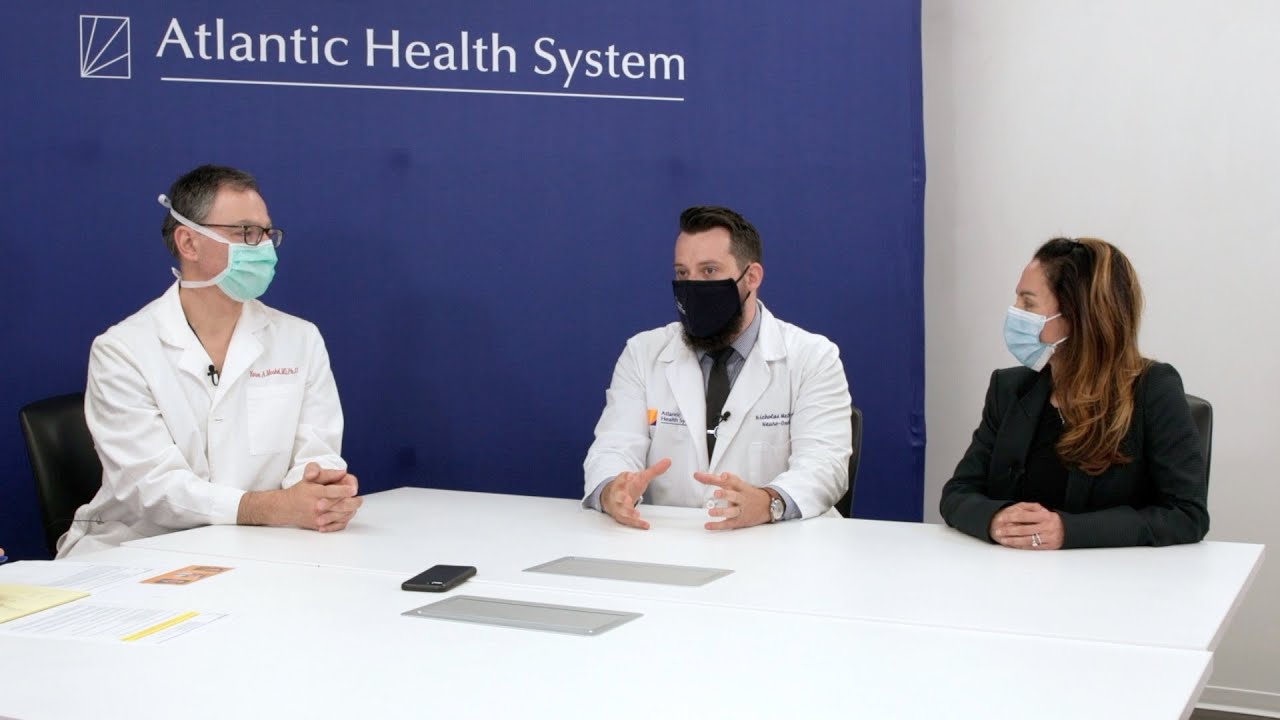 Yaron Moshel, MD, neurosurgeon and co-director of the brain tumor center, Joana Emmolo, MD, director of radiation oncology, and neuro-oncologist Nicholas Metrus, MD, answered a variety of questions from viewers in the May 25 event on Facebook Live.

Atlantic Health System takes a multidisciplinary approach to treating brain tumors. What does that mean in terms of care?

A multidisciplinary approach means incorporating different clinical perspectives and areas of expertise under one roof in the treatment of brain tumors, Dr. Moshel explained. If physicians work separately, it fragments the process and requires patients to access care from different offices at different times with different doctors, he said.

The multidisciplinary approach is more patient-centered and consolidates treatment in one central location where physicians can collaborate and focus on the needs of each individual case, together.

Dr. Emmolo added, “Instead of coming at it just from a radiation oncologist perspective, I’m getting the surgeon’s perspective, the neuro-oncologist, the radiologist can help me, which is huge when I use radiology to target my treatment.”

Instead of operating in silos, the doctors learn about each other’s perspectives and areas of expertise. It gives the patient a better treatment and, hopefully, a better outcome, she said.

Sign up to receive news and updates about our Community Conversations. This form is for North American residents only.

Does a multidisciplinary approach enable physicians to work more efficiently?

“Things happen a lot faster when we don't spend a week waiting in between appointments and we just do everything all at once on day one and keep things moving forward,” Dr. Emmolo stated.

Dr. Metrus agreed that working quickly and efficiently is critical and that a multidisciplinary approach enables the team to chart a path forward for patients.

“Once you've been diagnosed with a brain tumor, you want to know next steps,” said Dr. Metrus. “By having this multidisciplinary approach, (when) we walk into the room, we have looked at your MRIs, we’ve looked at your brain tissue and have actually seen what the pictures of your tissue look like. We've talked about what's not only the next step, but the step after that, and maybe even the step after that, depending on if it's a straight line, and we know a little bit more about you.”

Dr. Metrus also spoke about the importance of knowing the whole patient – their job, their hobbies, and their routine – to better understand how treatment will impact their life.

Are all brain tumors cancerous?

A brain’s tumor is an abnormality that can be cancerous or not. Brain tumors are given grades to describe their severity, Dr. Metrus explained.

He used the example of a common brain tumor called a meningioma. This type of brain tumor has three grades. Most people with the condition have a grade one meningioma, which is often benign (non-cancerous).

Dr. Emmolo elaborated on the idea of grades.

“The brain is all about real estate, it's location, location, location. And so some of these tumors can be benign, but they can be in a location where they're creating a problem just based on the geography, and what they're impinging on.”

Even if the tumor is not cancerous, it can cause severe symptoms for the patient.

“It really depends on where, and what we're dealing with, and what the capacity for change over time is."

What are the symptoms and signs of a brain tumor?

Dr. Moshel made clear that the occurrence of a tumor does not necessarily come with obvious or sudden symptoms. He attributed increased diagnosis rates to the proliferation of MRI centers around the region, which are often the initial way patients learn they have a tumor.

"It's not like a stroke where you have a sudden onset to a problem, where it's an abrupt beginning,” Dr. Moshel explained. “It's typically more of a lingering thing. Unfortunately, a lot of people develop problems. And in our busy lives, people often chalk it up to old age and ignore symptoms."

Some symptoms can be vague, like cognitive fogginess, memory loss, weakness and seizures, he said.

Dr. Metrus added that seizures themselves can be subtle, such as an odd sensation or even an intense, reoccurring feeling of déjà vu. Although headaches can indicate a brain tumor, it is usually accompanied by other symptoms, such as weakness in the arm or confusion, he said.

"If you feel like you've been having something new that you weren't having before and it is of concern, have it checked out by your primary care doctor," said Dr. Metrus.

What is the difference between radiation oncology, neuro-oncology and neurosurgery?

Radiation oncology is the use of imaging – CAT scans, MRIs, etc. – to guide and focus high energy doses of radiation around tissue to treat abnormalities, Dr. Emmolo said.

Neuro-oncologists are trained as general neurologists and then specialize in tumors that began in the brain or the spine and cancers elsewhere in the body that have spread into the central nervous system, Dr. Metrus said. Neuro-oncologists are rare. There are only around 300 in the country. Two practice in New Jersey, and both are at the Gerald J. Glasser Brain Tumor Center at Atlantic Health System.

Neurosurgery is basically the art of doing surgery to try to remove a brain tumor, Dr. Moshel explained.

How has technology changed the treatment of brain tumors?

For radiation treatments, advances in technology allow for the delivery of higher doses of radiation in a more focused, pinpointed manner to protect healthy brain tissue from exposure. This results in better outcomes with less toxicity, Dr. Emmolo said.

What is "awake" brain surgery?

“Awake” brain surgery is performed while the patient is conscious.

The prospect of being awake during brain surgery could be scary for patients, Dr. Moshel acknowledged. But he insisted that many find the process "fun." Dr. Emmolo added that some patients even sing during the procedure.

Ray vividly recalls his awake brain surgery, including how he tried to diffuse his fear with humor, cracking jokes and singing a song he had sung to his wife on their wedding anniversary during the operation. Read more >

Dr. Moshel said that the area around the skull is numb, the brain is exposed and patients do not feel any pain.

"Awake" brain surgery is sometimes performed on patients whose speech function has been affected by a tumor, Dr. Moshel explained.

“I can remove a tumor in the speech centers, but if you're asleep, I can't (be sure) that your speech is going to be okay. The only way I can (evaluate) that is by testing your speech during the surgery,” he acknowledged.

Patients who stay awake in surgery tend to go home sooner because they were able to avoid all the medications and issues that anesthesia can cause.

If a patient has a meningioma, how often should it be checked by a doctor?

According to Dr. Metrus, “a good rule of thumb is to watch a meningioma once every year, unless any new or worsening symptoms are developing."

He said that not all meningioma grow and that some are very stable or grow so subtly that it's very difficult to detect. Developing an ongoing relationship with the team at the brain tumor center is important and will help guide your diagnosis and treatment options.

How do you know when you've maxed out on the acceptable limit of radiation with CyberKnife to the brain as part of a post-surgical treatment?

"That’s a complicated question only because all of our tissues have a lifetime limit in terms of how much radiation they can safely see before we cross the threshold into increasing risk for damage from the radiation,” Dr. Emmolo responded.

There is some capacity for recovery from the radiation exposure over which might give doctors a little bit more room to give more treatment if needed, she said. As technology improves, physicians are learning how to push the limit on how much treatment can be safely delivered.

What types of support services are available for patients with brain tumors?

Dr. Moshel said that the Glasser Brain Tumor Center has a large team of experts who coordinate care for every patient on an individual level.

"In addition to that set of physicians, we have Dr. Brian Beyerl, who's a retired neurosurgeon and has treated a lot of brain tumors. He's also a deacon at the church, so he's kind of become our family advocate. He's amazing. He'll visit with families and get to know them. He's very skilled and also comes to it with a very broad knowledge base."

The center has a patient navigator and social worker as well. The Child Life Program provides support to the center's youngest patients who are struggling with a diagnosis. Finally, the brain tumor center hosts a support group that focuses on day-to-day issues that patients face, including insurance issues, transportation, therapy and nutritional guidance.