The event has raised more than $150,000 since the inaugural 5K six years ago.

The annual race was started in 2013 by Long Valley teenager Zach Rice when he was just 10 years old. Zach spent significant time in the hospital for a condition known as avascular necrosis, which followed a severe hip joint infection ultimately causing death of bone tissue due to interruption of the blood supply.

One of Zach’s doctors, Barbara Minkowitz, MD, a pediatric orthopedic surgeon at Atlantic Medical Group helped diagnose the condition as part of his medical team. Dr. Minkowitz has become heavily involved in the fundraiser, “It has been an honor to help take care of Zach and a privilege to be a part of this wonderful event. I am passionate about promoting pediatric bone health within our community and happy to support Goryeb Children’s Hospital.”

While in the hospital, Zach distracted himself from his environment by playing video games--and he realized that other children in the hospital could similarly benefit.

The idea for the fundraiser was his own and Zach worked with his family to make his goals a reality. Even in its inaugural year, Zach made his own pitches to businesses and sponsors with an external fixator device on his hip. He also has brought in friends from school to help out every year.

The money raised at the Action For Distraction 5K is supplemented each year by the Foundation for Morristown Medical Center’s Kids4Kids Committee, which has donated flat-screen TVs to go along with the gaming consoles. In addition to providing young patients with video game systems, the yearly funds from the committee enable the hospital to invest in art and pet therapy.

But the benefits of the 5K go beyond the financial. Every year, the event honors one child in the community who has been helped in some way by Goryeb Children’s Hospital. This year’s honoree is Stephen Murray, a senior at Morristown High School who is on the autism spectrum in addition to being a runner, skier, singer in the school choir and member of the National Music Honor Society. 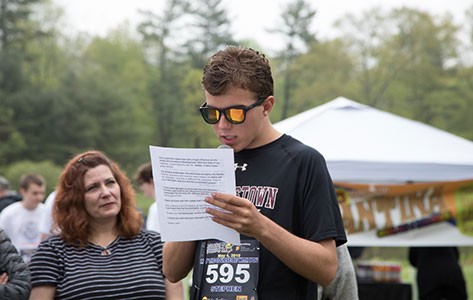 The Action for Distraction 5K has become so popular that a spin-off fall event, called the Skeleton Run was added last year. Zach’s younger sister, Mackenzie, has become more involved through the years and she plays an intricate part in organizing the Skeleton Run.

This year’s spooky event will be held on October 19 on a more challenging, hilly course at Central Park in Morris Plains.