Summit, NJ – When a person suffers a stroke, time is of the essence – every minute counts. Recognizing how vital it is that stroke neurosurgeons and neurologists receive timely information about the type of stroke a person is having so they can decide on the best treatment, Atlantic Health System Neuroscience recently introduced a system-wide rollout of a cutting-edge technology called RAPID®.

RAPID is a new class of automated brain-imaging software that allows experts to swiftly discern whether a patient has reduced blood flow to the brain and other signs of brain injury. The technology enables them to treat a greater number of patients within the newly expanded 24-hour post-stroke onset window during which surgery and other therapies can be helpful. 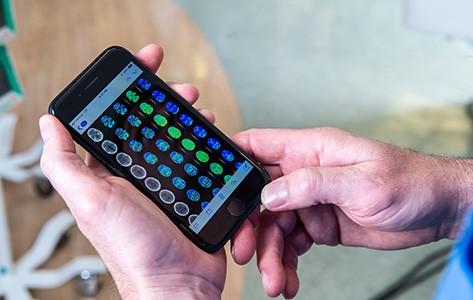 RAPID provides the most advanced brain imaging to stroke experts. Overlook Medical Center was among the first facilities in the area to acquire RAPID. The platform is noteworthy for its ability to shave time from the treatment decision-making process: Images are transmitted from patients’ CTA (computed tomography angiography) and CTP (computed tomography perfusion) to hospital systems and physicians’ smart phones within just minutes.

Following the pilot roll out of RAPID at Overlook Medical Center, Atlantic Health System hospitals Morristown, Newton and Chilton medical centers also implemented the software for use by their Comprehensive and Primary Stroke Center teams.

“This speed is key when it comes to treating patients,” said John M. Hanna, MD, medical director, Comprehensive Stroke Center, Overlook Medical Center. “Before, processing of the CTA into clinically meaningful images took 15 to 20 minutes. This did not account for the time it took to upload the images into our system. With RAPID, after the CTA is complete, it takes two minutes to send the key images to our phones.”

Atlantic Health System Neuroscience has been a leader in embracing technology to treat stroke patients with its earlier adoption of the TeleStroke platform, which is in use throughout Atlantic Health System. TeleStroke enables EMTs and paramedics to communicate directly with a neurologist while the patient is still being transported by ambulance, facilitating any preparations that need to be made before his or her arrival. Once the patient is in the emergency department, a TeleStroke robot – comprised of a camera and monitor--lets the neurologist see and assess the patient remotely. Based on the success of TeleStroke, acquiring RAPID was the next natural step toward streamlining the diagnosis and treatment process for stroke patients at Atlantic Health System.

Atlantic Health System Neuroscience, working with Atlantic Mobile Health, was the first in the nation to deploy and use portable TeleStroke technology in ambulances for routine pre-hospital assessment of stroke patients. Stroke neurologists at Overlook Medical Center also provide neurological evaluations via TeleStroke devices deployed in emergency departments across six counties. In 2018, out of 2638 stroke patients treated at Atlantic Health System, 795 were evaluated through TeleStroke technology.

Atlantic Health System’s most complex stroke patients are treated at Overlook Medical Center’s Joint Commission-certified Comprehensive Stroke Center, a designation reserved for approximately 180 hospitals in the United States. Overlook is the only hospital in New York and New Jersey named as one of Healthgrades® America’s 100 Best Hospitals for Stroke Care™ for six years in a row (2014-2019).

Overlook Medical Center, with a helipad dedicated to emergency neurological patient transport, as well as a Neuro-ICU and 29-bed neuroscience inpatient unit, has established centers of excellence in the areas of brain tumor, concussion and traumatic brain injury, cerebrovascular disease, including stroke and aneurysm, epilepsy, memory and cognitive disorders, including Alzheimer’s disease, movement disorders, including Parkinson’s disease, neuromuscular disease, pain and headache, and spine disorders.

Overlook Medical Center is named by Healthgrades® among the Top 5% in the Nation for both Neurosciences and for Cranial Neurosurgery. CareChex®, a medical quality rating system that reviews hospital clinical quality, patient safety and performance of nearly all acute care hospitals and health systems in the U.S., ranked Overlook Medical Center as number one in New Jersey and Top 100 in the Nation for Medical Excellence and Patient Safety in Major Neurosurgery.