Summit, NJ – Atlantic Health System’s Overlook Medical Center today announced its nationally recognized neurosurgery team is the first in New Jersey to pioneer the use of a new minimally invasive option for brain surgery – the ROSA® Brain robot. Created by device manufacturer Zimmer Biomet, ROSA Brain is a surgical navigation and positioning system, much like a GPS, that allows for precise spatial positioning and orientation of surgical instruments and tools. 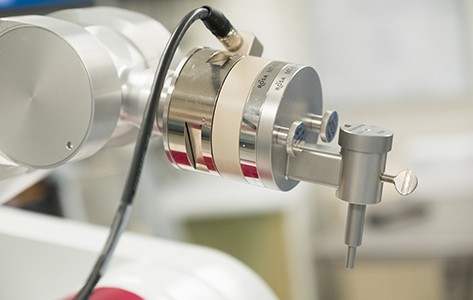 Conventional neurosurgery for epilepsy requires a craniotomy, which is the surgical removal of part of the bone from the skull to expose the brain, so that electrodes can be placed to detect and record seizure activity. Due to the complexity of epilepsy surgery, only the most technically skilled neurosurgeons are trained to use the ROSA Brain robot which does not require opening the skull, or even shaving the head.

“We’re truly excited to be the first in New Jersey to use the ROSA Brain robot during brain surgery,” said Dr. Benitez. “Seizures can be a daily occurrence for epilepsy patients and approximately 30 percent of these patients don’t respond to medication. Using a tool like the ROSA robot is a far less invasive surgery and adds new surgical options that can drastically improve the quality of life for patients with seizures.”

Using the ROSA Brain robot, surgeons make tiny holes in the skull through which they insert the electrodes. The electrodes record brain activity and help pinpoint exactly which part of the brain is responsible for seizures. The robot also can assist in deep brain stimulation, trans-nasal and ventricular endoscopy, and brain biopsies.

The Epilepsy Center at Overlook Medical Center is designated a Level 4 Epilepsy Center – the highest ranking - by the National Association of Epilepsy Centers (NAEC). The Epilepsy Center provides access to major breakthroughs in technology, medication and surgical intervention for epilepsy. Services include intensive neuro-diagnostic monitoring, extensive medical, neuropsychological and psychosocial treatments, as well as a broad range of neurosurgical procedures for epilepsy.

Overlook Medical Center was the first in New Jersey to evaluate epilepsy patients using magnetoencephalography (MEG) – a noninvasive procedure that uses precise sensors to detect and record the magnetic fields associated with electrical activity in the brain for functional brain mapping and surgical planning. Other advanced neuro-diagnostics includes a 3Tesla MRI, the most powerful clinical scanner available for producing exceptionally detailed diagnostic images of the brain; electrocorticography, which records electrical activity in the brain by placing electrodes in direct contact with the cerebral cortex; and a Wada test to identify which hemisphere of the brain is dominant for language and memory function. Inpatient video electroencephalograms (EEG) monitoring, as well as CT, PET, and SPECT scans are also available.

Advanced surgical options include vagus nerve stimulation (VNS) - the least invasive surgical option - to send an electrical impulse to the vagus nerve to disrupt seizures. Responsive neurostimulation (RNS®), a moderately invasive surgical option and the world’s first and only medical device that can monitor and respond to brain activity. Overlook Medical Center is the first in New Jersey to provide robotic-assisted stereo-electroencephalography (SEEG) using the ROSA® Brain for minimally invasive electrode placement.

Atlantic Health System Neuroscience, working with Atlantic Mobile Health, was the first in the nation to deploy and use portable TeleStroke technology in ambulances for routine pre-hospital assessment of stroke patients. Stroke neurologists at Overlook Medical Center also provide neurological evaluations via TeleStroke devices deployed in emergency departments across six counties. In 2018, out of 2638 stroke patients treated at Atlantic Health System, 795 were evaluated through TeleStroke technology.

Atlantic Health System’s most complex stroke patients are treated at Overlook Medical Center’s Joint Commission-certified Comprehensive Stroke Center, a designation reserved for approximately 180 hospitals in the United States. Overlook is the only hospital in New York and New Jersey named as one of Healthgrades® America’s 100 Best Hospitals for Stroke Care™ for six years in a row (2014-2019).

Overlook Medical Center, with a helipad dedicated to emergency neurological patient transport, as well as a Neuro-ICU and 29-bed neuroscience inpatient unit, has established centers of excellence in the areas of brain tumor, concussion and traumatic brain injury, cerebrovascular disease, including stroke and aneurysm, epilepsy, memory and cognitive disorders, including Alzheimer’s disease, movement disorders, including Parkinson’s disease, neuromuscular disease, pain and headache, and spine disorders.

Overlook Medical Center is named by Healthgrades® among the Top 5% in the Nation for both Neurosciences and for Cranial Neurosurgery. CareChex®, a medical quality rating system that reviews hospital clinical quality, patient safety and performance of nearly all acute care hospitals and health systems in the U.S., ranked Overlook Medical Center as number one in New Jersey and Top 100 in the Nation for Medical Excellence and Patient Safety in Major Neurosurgery.