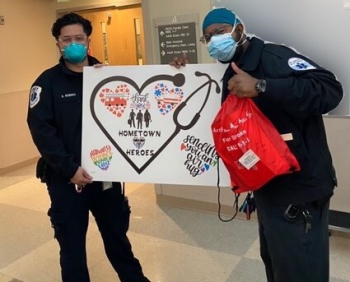 SUMMIT & UNION – MAY 2020 – Overlook Medical Center celebrated the work of the dedicated EMS first responders throughout the communities it serves with awards, gifts and other recognition as part of the national EMS Week, May 18–22.

“The first responders throughout our region have been our steadfast partners through the height of the pandemic, and their collaboration in caring for our patients during this event has only deepened our appreciation for them,” said Christopher Amalfitano, MD, chairman of the emergency department at Overlook.

“As we move forward together, we will continue to rely on them to ensure that people in our communities have safe access to care for all of their medical needs,” said Sharon Kelly, RN, director of emergency services at Overlook Medical Center’s Summit and Union campuses. 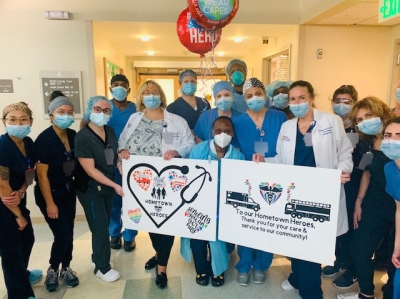 While the need to maintain social distancing and prevent mass gatherings in order to fight the spread of COVID-19 precluded Overlook’s annual Excellence in EMS Awards Celebration, a gala event normally held in late May, Overlook was undeterred from recognizing the dedication of the region’s EMS members.

“If anything, the pandemic has only further emphasized the importance of highlighting these brave individuals, who have been on the front lines within our communities,” said Jennifer Moran, RN, nurse manager for Overlook’s emergency department, one of the organizers of the annual event. 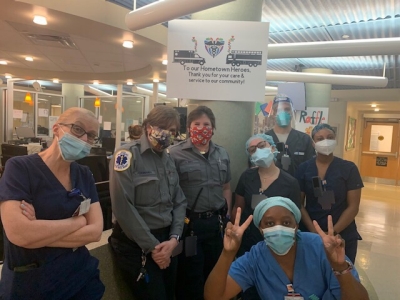 Included in the raffle winners were several members of Atlantic Mobile Health, which includes the organization’s own emergency medical responders, which serve communities throughout the region:

Throughout the pandemic, Overlook Medical Center undertook significant measures to ensure patient, family, staff and first responder safety. As cases of COVID-19 have continued to drop throughout Atlantic Health System and New Jersey, Overlook has put several measures in place, including triage screening at the ED door, separate entrances for COVID-19 and non-COVID-19 patients, deep cleaning process and temperature screening, all to ensure patients can safely access care.

Powered by a passionate workforce of 17,000 team members and 4,800 affiliated physicians dedicated to building healthier communities, Atlantic Health System serves more than half of the state of New Jersey, including 11 counties and 4.9 million people. The system provides care for the full continuum of health needs across a wide array of settings, including Atlantic Medical Group, one of the largest multi-specialty practices in New Jersey with more than 1,000 physicians and providers, 12 urgent care centers, Atlantic Rehabilitation Institute, Atlantic Visiting Nurse and Atlantic Anywhere’s Virtual Visits. Facilitating connections between these services on both land and air is the transportation fleet of Atlantic Mobile Health.