Joseph V. had the shock of his life when a CT scan and subsequent MRI showed a large tumor compressing a critical area of the brain called the internal capsule.

From Brain Tumor to Best Man

It was a Sunday and 31-year-old Joseph V. was sitting in the Overlook Medical Center Emergency Department, awaiting the results of a CT scan on his brain. Less than 24 hours earlier, Joe had attended a close friend’s wedding, where he and several others agreed that he should seek medical attention.

“The small symptoms I was having over the past several months were adding up,” recalls Joe, a hedge fund accountant and hockey player from East Brunswick. “At first, my sense of taste was off. Then, I had trouble texting and typing with my left hand. One morning, I had a seizure, but didn’t know what it was. At the wedding, I couldn’t hold a drink steady or smile on the left side of my face.”

At the suggestion of his then-fiancé Nicole and her family, who knew of the stellar reputation of Atlantic Neuroscience Institute at Overlook, Joe paid a visit to Overlook’s emergency department. “I had the shock of my life when the physician told me I had a brain tumor,” says Joe, who was immediately admitted to the neuro intensive care unit for further evaluation by the Gerald J. Glasser Brain Tumor Center team. 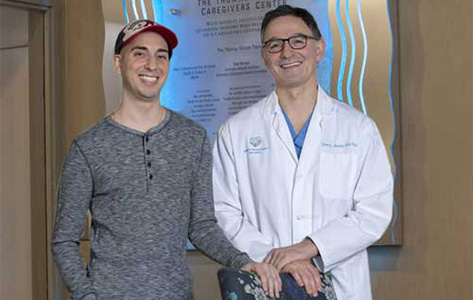 Yaron A. Moshel, MD, PhD, a neurosurgeon and co-director of The Gerald J. Glasser Brain Tumor Center, explained that the CT scan and subsequent MRI showed a large tumor compressing a critical area of the brain called the internal capsule. “The internal capsule is a deep-seated communication pathway, which controls physical movement and perception of sensory information,” Dr. Moshel explains. “Based upon the size of the tumor, it’s likely that it was growing for some time. As it grows, the brain adjusts until the tumor becomes so big, it reaches a breaking point. That’s when motor function deteriorates.”

“I told Dr. Moshel that I was very scared and nervous about the possibility of brain surgery,” states Joe. “My brother was getting married on Friday and I was the best man. I wanted to go home and think about it.”

I could walk. I could talk, and you could barely see the scar. Dr. Moshel worked an absolute miracle! I owe him and the staff at Overlook a lot more than I can describe in words.

“Believe me, I would have preferred to send Joe home and perform the surgery after his brother’s wedding,” remarks Dr. Moshel. “I wouldn’t be able to live with myself if I somehow ruined their wedding, but the physician side of me knew we couldn’t wait to remove the tumor. I promised him we’d operate Monday and he’d be at the wedding Friday.”

“Dr. Moshel’s words gave me the confidence to proceed with the surgery,” observes Joe. “He answered all my questions and calmed me down. I thought it was life-threatening surgery, but he proved otherwise.”

As Joe headed into surgery, his family, fiancé and friends gathered in Overlook’s Thomas Glasser Caregivers Center where they found comfort and support as they waited for the outcome. Meanwhile, in one of Overlook’s specially equipped neurosurgical suites, the surgical team carefully monitored Joe’s motor functions – through electrical stimulation and intraoperative functional brain mapping – as Dr. Moshel delicately removed the entire tumor. Remarkably, only a tiny patch of Joe’s hair was shaved to ensure that he would look his best as the best man.

“I had the surgery Monday and I was discharged Thursday, just in time to write my speech and deliver it Friday at my brother’s wedding,” remarks Joe. “I could walk. I could talk, and you could barely see the scar. Dr. Moshel worked an absolute miracle! I owe him and the staff at Overlook a lot more than I can describe in words.”

Two weeks following the surgery, Joe and his family returned to Overlook to review the results of the tumor pathology and meet with the multidisciplinary team, which is standard protocol for all brain tumor patients. Dr. Moshel explained that testing showed that the tumor was classified as an anaplastic astroscytoma, and that – although it was completely removed during surgery – Joe would need chemotherapy and radiation to treat the cavity that is left behind. Dr. Moshel also revealed that Joe’s tumor had genetic mutations that might be targeted with existing drugs during his treatment.

During the meeting, Dr. Moshel introduced Joe to neuro-oncologist Nicholas Metrus, MD, who would design and oversee an individualized treatment plan, which could include any combination of chemotherapy, targeted therapy, and immunotherapy.

Putting the comfort of his patient first, Dr. Metrus arranged for Joe to have his daily radiation treatments closer to his home for the next six weeks. Following the initial round of chemotherapy and radiation, Joe was optimistic about his prognosis under the coordinated care of the Brain Tumor Center team. Sure enough, Joe continued to progress in his recovery and he and Nicole were married in July 2021.

With confidence and compassion, we help patients and their loved ones navigate the journey from comprehensive diagnosis to personalized treatment.