Just four days after the birth of her son, Kylene M. was surprised when she began coughing up blood. As a non-smoker, she was even more shocked when a series of tests revealed that she had a rare form of lung cancer called colloid carcinoma.

“The first six months of my son’s life were a roller coaster of emotions,” says Kylene. “I was happy and excited about the arrival of my son, but devastated and terrified for my health. I was in denial because I didn’t think it was possible I could have lung cancer as a nonsmoker.”

According to Mark Widmann, MD, chief of thoracic surgery for Morristown Medical Center, colloid carcinoma accounts for less than 1 percent of all primary lung cancers, often masquerading as a cyst. To properly diagnose and treat Kylene, Dr. Widmann and his team used video-assisted technology, which allows surgeons to look through the rib space with a telescope attached to a high-definition camera that provides magnified, well-illuminated images. This technique is minimally invasive and eliminates the need to open the chest cavity. 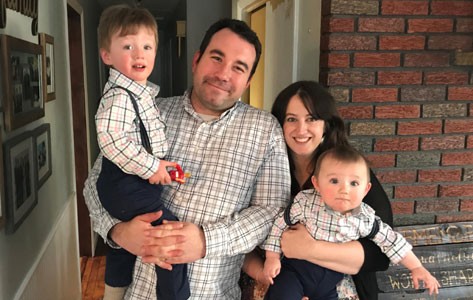 “Now we can routinely do complex operations on the lungs and discharge patients within one to two days,” says Dr. Widmann. “Kylene underwent two procedures – one was diagnostic, where we removed the cyst in order to complete complex pathology studies. In the second procedure, we took out the remainder of the affected lobe to prevent any cancer recurrence.”

Fortunately for Kylene, chemotherapy was not required. Instead, she will be monitored with computed tomography (CT) scans every six months for several years.

“The thoracic surgery team was excellent and their advanced treatment and support services are first-rate. Dr. Widmann and the team at Morristown Medical Center definitely saved my life,” says Kylene, who's grateful to have her health and watch her sons grow.