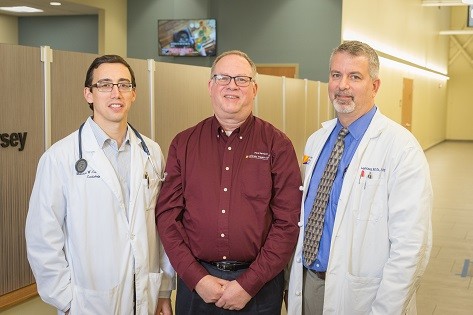 As manager of print services for Atlantic Health System, 58-year-old Tom P. from Edison is a very busy man, supervising team members at two print shops. Although he is based in the Livingston location, Tom spends at least one day a week in the shop at the Atlantic Health Pavilion near Chilton Medical Center and it’s a lucky thing he chose to spend October 1 there.

During his workday, he felt a strange sensation. “I just started feeling not right,” Tom said. “I never felt like that before. My whole body felt off in a way that’s hard to describe. I never suspected a heart issue, because I had no chest pain, just an odd feeling.”

Things moved so quickly, by the time my wife arrived, I was in recovery. It was, at most, 45 minutes from the time I arrived at the emergency department until I was diagnosed and remedied. 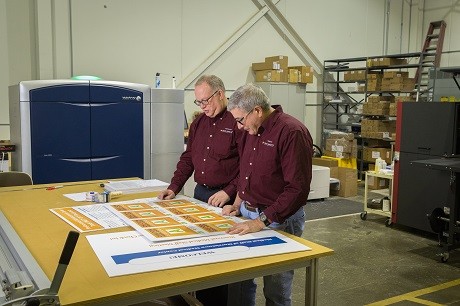 It was suggested he go to Chilton Medical Center’s emergency department, located down the street.

When Tom arrived, the emergency department team was waiting for him. Within minutes, the cardiologist, Brandon Calenda, MD, had reviewed Tom’s EKG, and he was headed to the Cath Lab where interventional cardiologist and head of cardiac catheterization Lawrence Blitz, MD, would do the procedure.

It turns out that Tom had a 100% blockage of his left anterior descending (LAD) artery, the most deadly type of heart attack known as “the Widow Maker” heart attack.  Without emergency treatment, it’s usually fatal. Symptoms can include chest pain, discomfort, shortness of breath, nausea, cold sweat, lightheadedness and/or pain in the back of the jaw.

In the Cath Lab, Dr. Blitz inserted two stents to open Tom’s artery using the radial artery approach (through the wrist)  which minimizes recovery time and bleeding risks to patients.

"Things moved so quickly, by the time my wife arrived, I was in recovery. It was, at most, 45 minutes from the time I arrived at the emergency department until I was diagnosed and remedied.” Tom said.

It’s a good thing Tom listened to his body and went to the emergency room. He said if he had been in the Livingston print shop when he started feeling odd, he might have simply gone home. “You know how people say, ‘See how you feel in the morning?’ Morning might not have come for me if I’d waited.”

After a two-day stay at Chilton Medical Center, Tom was home and back to work at Atlantic Health System four days later.

Tom is now focused on living his healthiest life. “I’m a little bit more cognizant of what I’m eating,” he said. Although he never expected to be the focus of a story, he is tremendously grateful for the amazing care received and expertise of his colleagues.