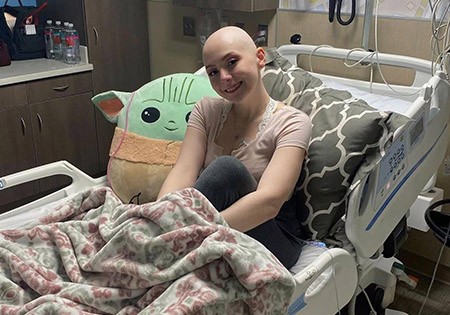 When she started her freshman year at the University of Hartford in September 2020, then 19-year-old Julianna T. expected to make long, daily strolls across the school’s 350-acre campus. She never imagined those walks would keep getting more painful.

Unbeknownst to her, a massive, cancerous tumor was growing in the femur of her right leg. Her condition, a rare cancer called Ewing Sarcoma, occurs in only about 200 children and teens in the U.S. each year. “My cousin was diagnosed with it at age 14 and has been fighting it for the last 10 years, so I knew I was at risk,” Julianna says.

But she didn’t suspect cancer early on, even while the aching in her right leg grew from tolerable to unbearable in just six weeks at college. “The pain got so bad, I couldn’t walk on it,” Julianna says. Adding to the mystery: an X-ray taken in September that showed no signs of injury or disease. “One doctor thought it could be an IT band injury,” she says.

Finding the cause of her pain

When the university stopped in-person classes in November due to COVID-19, Julianna returned home to Long Island, where her pain persisted despite conservative treatments. In January 2021, she conferred with her uncle, Jonathan Torres, DO, a family medicine physician with Atlantic Health System's Morristown Medical Center Family Medicine, who referred her to Physiatrist Gregory Mulford, MD, with Atlantic Medical Group Physical Medicine and Rehabilitation. Dr. Mulford performed tests that showed the muscles in Julianna’s right tibia were operating at just 25% capacity and ordered additional imaging tests.

At almost the same time, Julianna’s mom was diagnosed with COVID-19. “I had to go to my grandparent’s house so she could quarantine,” Julianna says. “I couldn’t walk on my leg. I had to army crawl up the stairs to my room to get my stuff.”

On January 14, the new round of imaging tests revealed the cause of her pain: a 13-centimeter tumor involving the hip. “It was about the size of an iPhone 11 ProMax,” Julianna says. Her uncle recommended she see orthopedic oncologist James Wittig, MD, with Morristown Medical Center. Dr. Wittig is a national expert in limb-sparing surgeries that treat bone and blood cancers successfully.

I’ve been through hell and back, but the entire staff at Goryeb has been amazing; I love them so much,” she says. “And I think my scar is beautiful!

The next morning, Dr. Wittig reviewed Julianna’s MRI and other imaging tests, suspected cancer and ordered a biopsy. “He said ‘cancer’ and I literally said, ‘happy 2021,” Julianna says. “I didn’t know how to react. I didn’t cry, either. I had already gone through so much pain, I was happy for a diagnosis.” The biopsy confirmed she had Stage 3 Ewing Sarcoma.

To try and limit continuing damage from the tumor, Dr. Wittig placed Julianna in a leg brace. But the tumor didn’t want to cooperate. On January 28, 2021, while Julianna was lying down after taking a shower, her leg snapped, the tumor having eaten through her femur. She was rushed to a nearby hospital, then transferred to Morristown Medical Center, where she and Dr. Wittig developed a treatment plan consisting of eight chemotherapy treatments, surgery, then six follow-up chemotherapy sessions.

“His bedside manner is really great,” Julianna says of Dr. Wittig. “He answered all my questions, told me what was happening and explained everything to me.”

On May 11, Dr. Wittig performed surgery to save Julianna’s leg, removing the tumor and replacing her right hip and the majority of her femur. He took extra time to get the length of her new right leg as close to that of her left leg as possible. “I admire the fact that he took eight hours to make sure the leg was where he wanted it to be,” Julianna says.

The day after surgery, Julianna walked on her new leg for the first time. Members of the team, including Kaitlin Zeedyk, PA, managed her follow-up care. “At my first appointment after two weeks, they were so happy with how my scar looked, they gave me a high five,” Julianna says. “If I had questions, they’d text me an answer within an hour,” she says.

The best news: A post-surgery analysis of the bone showed that chemotherapy had successfully killed the tumor, with no remaining evidence of cancer.

Getting back to her best self

She’s also building up her leg muscles through physical therapy, with a goal of walking without assistance by the end of the month. And she’s sharing her story with other young adults in cancer support groups. “When you’re young with cancer, you feel alone,” she says. “Hearing other people’s stories makes it easier.”

With her cancer in remission, she’s planning a return to college for the spring semester. She’s set on graduating on time and eventually becoming a doctor. She thanks her care team for getting her this far. “I’ve been through hell and back, but the entire staff at Goryeb has been amazing; I love them so much,” she says. “And I think my scar is beautiful!”