Some people are just born to run. Physical therapist Mickey S. has competed in more than 260 triathlons, 50 duathlons and qualified eight times for the Team USA World Age Group Championships. However, years of putting grueling pressure on his body eventually took its toll in the form of arthritis and ligament damage in his left knee.

Thanks to Mickey’s professional knowledge of body mechanics and his experience performing under punishing conditions, he was able to live with the pain. It wasn’t until 2015, during a climb to the summit of Mount Kilimanjaro in Africa, that he realized his ability to compete at a high level was in jeopardy.

“Going up was fine,” he says, “but coming down on my poor knee was tough. I couldn’t keep pace with my team on the descent and was left behind with two guides to assure my safety at the slower pace.”

Mickey knew he needed medical attention, but his options were slim. He had already undergone 12 procedures since 1980, which left him with a badly disfigured leg and an unstable knee that neither straightened, nor flexed to the full range. When he learned that Jeffrey Leary, MD, was giving a presentation on total joint replacement, he decided to attend, but left with fears that he might never run again. So, he continued to compete, albeit with increasing difficulty.

“While competing, my knee alignment must have taken that extra little shift and I literally lost the ability to run, having to walk to the finish line.”

Thereafter, Mickey spoke to several orthopedic surgeons at Morristown Medical Center and Overlook Medical Center and began to feel comfortable with the idea of staying local for his total knee replacement rather than going to New York. He returned to Dr. Leary’s office for a consultation, having fully accepted that he could no longer avoid surgery, but also knowing that the doctor had his best interests in mind.

“Dr. Leary spoke to me like a combination coach, parent, new friend and guidance counselor. He listened to my thoughts, emotions and goals,” Mickey explains. “He knew I would run, against his advice, and gave me a knee that would work for that.” 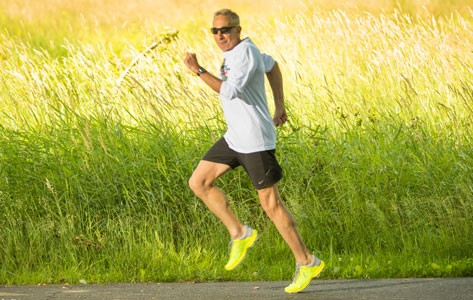 Dr. Leary meticulously planned the surgery with Mickey’s passion for running in mind. He chose the best type of artificial knee using the fewest pieces that could wear out.

“Now I hike up and down mountains with no problem, which is what Dr. Leary predicted,” says Mickey. “I like to say that I am not just a physical therapist, but a patient, as well. To celebrate 10 weeks post-op, I flew down to Florida to participate in a triathlon. My knee did great.”