Chronic pain and stiffness in the hip can be debilitating and can limit day-to-day activities, eventually leading to serious mobility issues. After suffering with hip pain, that’s something Sal B. of Parsippany understood thoroughly. Sal had his first hip replacement surgery in 1999.

Over time, the nearly 20 years of wear and tear on Sal’s implant took its toll and by 2018 Sal was told that his hip replacement should be replaced.

The Search for a Solution

The physician who originally performed Sal’s hip replacement was no longer performing surgery, so Sal began to search for a new surgeon and eventually sent to a well-known New York City hospital. The surgeon there discovered a portion of Sal's pelvis had been worn away, by the older hip device, and the joint needed to be rebuilt. 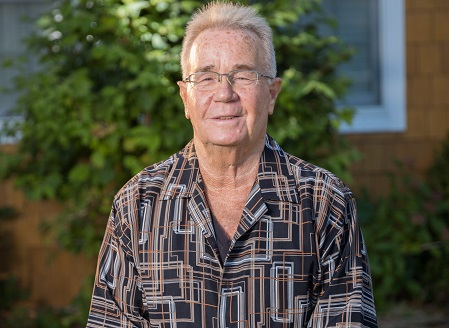 Sal just never seemed to recover. Following surgery, he attended physical therapy, but said he continued to have severe nerve pain, and the resulting numbness in his arms and legs made walking difficult.  The lack of sensation in his legs caused him to fall many times and following one such fall, on April 23, 2019, he was rushed to Morristown Medical Center. Upon examination, it was determined that two discs in Sal’s neck were crushing his spine.  Emergency  surgery was performed. As he recovered from surgery, the feeling in Sal’s arms and legs returned.

At a post-surgery appointment, Sal explained his ongoing hip issues, and was referred to John Dundon, MD, a board-certified (by the American Board of Orthopaedic Surgery) and fellowship-trained orthopedic surgeon specializing in total joint replacement of hips and knees.

Dr. Dundon examined Sal, who was wheelchair-bound at the time due to his hip pain. He immediately ordered blood work and a hip aspiration. The results quickly determined that Sal had a life-threatening infection in his hip and it was spreading into his spine.

Dr. Dundon explained that all the hardware holding his hip together needed to be removed in order to stop the spreading of the infection. Sal was hospitalized from December 3 through December 23, 2019, at Morristown Medical Center, where the implanted hardware was removed.

I feel so much better and am so grateful.

Finally Getting Back on His Feet

In February 2020, Dr. Dundon performed the complicated surgery needed to rebuild Sal’s deteriorated hip and pelvis to support his femur.  “Sal’s situation was extremely complex due to his numerous previous surgeries, the extent of the infection and the amount of reconstruction required,” said Dr. Dundon.

As Sal continues to heal, he is excited to see that his mobility is increasing each day and he is getting stronger and stronger. Sal and his family credit Dr. Dundon’s thorough approach and swift action in diagnosing the infection that saved Sal’s life and performing the extensive surgery needed that continues to bring him tremendous relief of his pain.

Sal said, “If Dr. Dundon hadn’t found the infection, I would still be in tremendous pain and getting sicker each day. He’s great. I feel so much better and am so grateful.”