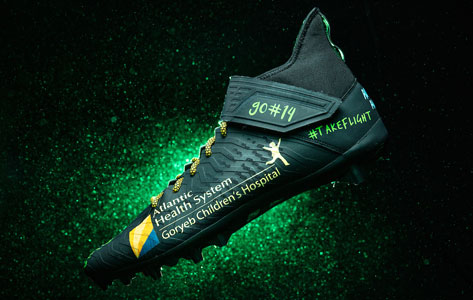 Atlantic Health System’s Goryeb Children’s Hospital has been selected by New York Jets quarterback, Sam Darnold, for the NFL’s My Cause My Cleats campaign. Darnold – who joins hundreds of players across the NFL in
wearing custom cleats representing charitable causes that are important to them – will wear cleats filled with words of encouragement and inspiration from kids at Goryeb Children’s Hospital as the team takes on the Miami Dolphins on Sunday, December 8. The cleats will then be auctioned off, with 100% of the proceeds benefitting the hospital.

Darnold chose Goryeb Children’s Hospital as it has been a special place for him since joining the Jets.

“Goryeb Children’s Hospital was one of the first stops I made after being drafted and I’m proud to support these kids any chance I can,” said Darnold. “I’ve made some incredible memories and connections with the children and their families that I’ve been fortunate enough to meet, so having their words of inspiration with me during the game is truly special.”

As the official health care partner of the New York Jets, both Atlantic Health System and the Jets have continued to support various causes beyond the walls of the hospital as well as on and off the field, including the fight against pediatric cancer.

To bid online for the cleats, you can visit NFL Auction.

Atlantic Health System has a long-standing tradition of providing exceptional patient outcomes and experiences. Home to seven award-winning hospitals including Morristown Medical Center, the number one hospital in NJ according to U.S. News & World Report, Castle Connelly and Newsweek’s World’s Best Hospitals, the system has been ranked first in New Jersey in consumer preference by Monigle and first among health systems in New Jersey as a “best workplace” by both Modern Healthcare and Fortune Magazine.

With a clear sense of purpose and an unparalleled culture, Atlantic Health System attracts top leaders in the field of health care, from CEO Brian Gragnolati, who is currently Chairman of the American Hospital Association, to the numerous team members who serve as leaders across national clinical associations and research entities.

About The New York Jets

The New York Jets were founded in 1959 as the New York Titans, an original member of the American Football League (AFL). The Jets won Super Bowl III, defeating the NFL’s Baltimore Colts in 1969. In 1970, the franchise joined the National Football League in the historic AFL–NFL merger that set the foundation for today’s league. As part of a commitment to its fan base through innovation and experiences, the team has created initiatives such as, its Jets Rewards program, a state-of-the-art mobile app, and Jets 360 Productions, a comprehensive content platform that gives fans greater access to the team across all digital and social platforms. Led by its trail blazing Anti-Bullying Program, the organization takes great pride in a long-standing, year-round commitment to their community. These programs are funded by the New York Jets Foundation and look to positively influence the lives of young men and women in the tri-state area, particularly in disadvantaged communities. The organization also supports the efforts of the Lupus Research Alliance and numerous established charitable organizations and causes sponsored by the NFL.. The New York Jets play in MetLife Stadium, which opened in 2010, and are headquartered at the Atlantic Health Jets Training Center in Florham Park, New Jersey.