MaryAnn LoFrumento, MD, a hospitalist specializing in newborns at Morristown Medical Center, was named winner of the Ambassador category for her work with “Hands Up for Haiti,” a medical humanitarian organization committed to making a positive impact on the health of the people of northern Haiti. The Ambassador category recognizes individuals whose exemplary volunteer service beyond the borders of New Jersey have made the world a better place for some while reflecting favorably on the people of the Garden State. 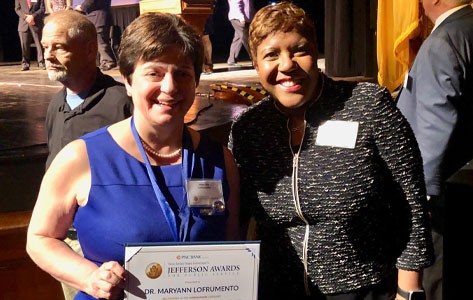 “Atlantic Health System is dedicated to building healthier communities. For many of our medical staff and team members, this commitment extends beyond the walls of our hospitals to exceptional volunteerism across the United States and abroad,” said Brian Gragnolati, president and chief executive officer, Atlantic Health System. “We are incredibly proud of Dr. LoFrumento and all Atlantic Health System family members who devote their personal time to helping others and live a life of extraordinary caring.”

In addition to Dr. LoFrumento, the following Atlantic Health System honorees were recognized:

About the Jefferson Awards