The doctors treating Kellieann S. were right on the nose.

Specifically, in her nose. Kellieann, a 39-year-old mother of four from Warren, NJ, had a brain tumor removed via her nostrils at Morristown Medical Center. It’s a high-tech alternative to the traditional surgery, which requires cracking open the skull and possibly manipulating the brain.“

This (procedure) has evolved tremendously,” says Kellieann’s neurosurgeon, Dr. Yaron Moshel. He should know, since he helped pioneer it. 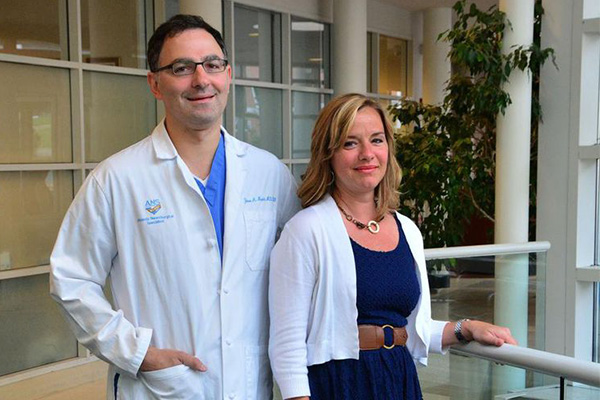 Kellieann’s saga began when she went in for a cardiac procedure to fix a problem with her heart valve. At the time, doctors also diagnosed her with Lyme disease. She underwent treatment for both, but afterward still didn’t feel better. Kellieann was having trouble with her vision, vomiting constantly, losing weight rapidly, always tired and fighting awful headaches.

Doctors at Morristown Medical Center were stumped. “She had been classified as one of these people with chronic fatigue syndrome and fibromyalgia,” said Moshel. “She saw every Lyme disease expert. No one could figure out what was wrong.”

Kellieann endured her pain for a year and a half before she was sent for an MRI — which detected a benign tumor on her pituitary gland.

Once (Dr. Moshel) explained it to me, I canceled a consultation I had in the city. I was very satisfied with the way he said it would be done.

The pituitary gland, which secretes hormones into the body, sits on the base of the skull, under the brain and on top of the nose. When a tumor develops there, it can cause vision loss and impede the gland’s functioning.

But because Kellieann’s tumor was not cancerous, doctors didn’t initially think it was the root of her problem. An endocrinologist at Morristown, Dr. Elkin Nunez, made the connection after analyzing her lab results.

“Her growth hormone levels were through the roof,” Moshel recalled.

To get back to normal, Kellieann needed surgery. She researched both traditional and new techniques and was thrilled when Moshel recommended his unique approach.

“Once he explained it to me, I canceled a consultation I had in the city,” she said. “I was very satisfied with the way he said it would be done.”

The procedure itself is the stuff of science fiction: Moshel and Dr. Seth Kanowitz — an ear, nose and throat surgeon — sent an endoscope and tiny surgical instruments up her nostril to the gland to dismantle the tumor. They then removed the tumor through the nostril piece by piece. They couldn’t see her brain on the table, but real-time footage captured by the endoscope appeared on a screen in the operating room next to her MRI image, so that the surgeons knew what they were doing.

“It’s kind of like playing a video game,” says Moshel, who adds he’s done the operation more than 100 times. “The whole surgery is done on a video screen. We’re watching live what we’re doing in the brain and the instruments are tracking our moves and showing (them) on the MRI.”

In addition to a minimal risk of brain manipulation, the smaller incisions mean to a shorter recovery time.

“From the patient experience (this) becomes no different than sinus surgery,” he said. Immediately after the operation, Kellieann said she could see normally and wasn’t dizzy. Now she’s home and able to get back to enjoying life. She just took a trip to Aruba, which she wouldn’t have been able to do before. And after having to miss her daughter’s national cheerleading championships, she’s ready to coach her again.

“My quality of life is wonderful now,” she said. This innovative procedure isn’t the standard yet — a medical center has to have the specialized training and equipment that Morristown does — but Moshel hopes it one day will be.

“It feels wrong to do the old operation,” he said.