Some people know as a child what they want to be when they grow up. Others, like Michael I., discover what they’re passionate about later on in life.

“A friend of mine recommended that I become a plumber,” Michael says. “It’s a good career, so I tried it. I’ve loved every day of it.”

Unfortunately for Michael, his career was almost cut short. While driving early one morning, a school bus rear-ended him at a traffic light, causing damage to his L4 vertebrae. He was unable to sit or bend for any extended period of time, which also meant he couldn’t work.

“I figured I had a better chance of getting a doctor that could help me in Morristown than other places,” Michael states.

Dr. Nachwalter successfully performed a spinal fusion, which created stability around the injured area of Michael’s spine. Following the surgery and two months of physical therapy, his mobility returned with only a few restrictions. 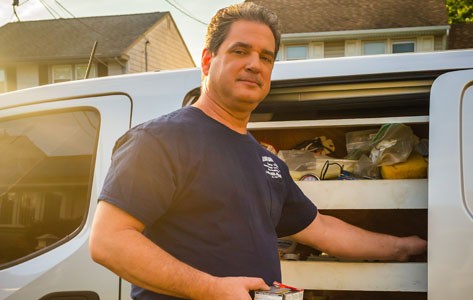 Michael also took the advice of Dr. Nachwalter and quit smoking and started exercising regularly, losing 60 pounds in the process. He also now shoots hoops with his son and while he may not be able to take him on in a strenuous game of one-on-one, he’s feeling as healthy as ever. Perhaps most importantly, he’s been able to resume work and is once again doing what he loves.