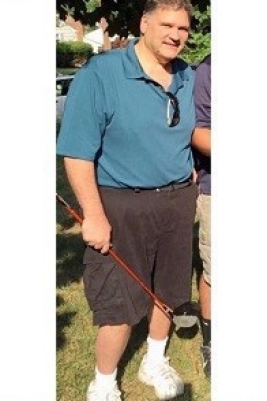 Healthier Than He's Been in Years, Thanks to Bariatric Surgery

Two years ago, Jim C., now 60, of Little Falls, NJ, was obese, suffering from a combination of diabetes, high blood pressure and high cholesterol and had trouble enjoying his favorite sport – golf, because it was hard to get around. After bariatric surgery and losing nearly 150 pounds, Jim is back in the swing of things and has learned that when you have your health, you have everything.

Jim and his wife Lisa, married for 30 years, tried various diets to lose weight together. While another diet worked well for Lisa, Jim struggled. “I just couldn't maintain it,” he said. “I lost a little bit but not enough to make it help my health.”

“At my highest weight of 345, I had been diabetic for about eight years, and I was on three different medications,” Jim said. “I also had high blood pressure and was on two medications for the blood pressure. My A1C was over 9. My cholesterol was high. And it was all due to my weight.” 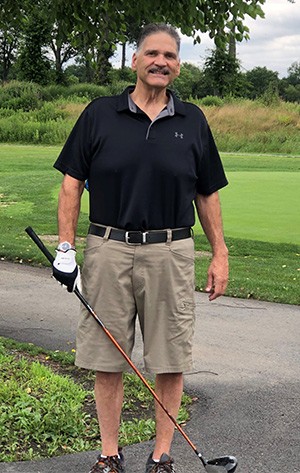 Knowing that he had to do something, Jim spoke with to his primary care physician about his frustration with his weight and his worries about the long-term effects of all his medications. He asked whether weight loss surgery might work for him. His doctor advised, “You've been trying different diets for the last 15 years, I think the benefits would outweigh any possible risks right now for you.”

Jim began his research, went online and watched a webinar about the various forms of bariatric surgery and how the procedure could help him.

“As I looked into it further, I found out that Dr. Channing Chin was opening up a branch in New Jersey, so that made it a lot easier. His office in Wayne is literally 10 minutes from my house,” Jim said.

Upon meeting Dr. Chin and his staff, Jim said “I was just impressed with his demeanor and the whole program. So, I learned a lot about it online. And then I went into the program and lost some weight before surgery.”

Based on Jim’s many health issues, Dr. Chin recommended a Roux-en-Y gastric bypass. In this form of bariatric surgery, the surgeon staples off the upper section to a small pouch about the size of an egg, and then attaches this pouch directly to part of the small intestine.

Jim had the surgery at Chilton Medical Center in November of 2019. Now down 145 pounds, the results have been life-changing for him.

“I am no longer considered a diabetic, so that’s fantastic,” Jim exclaimed. “I don't take any medication at all for diabetes. My blood pressure has been normal since the first couple of months after surgery, so I take no medication for blood pressure. My A1C is 5.1, which is great. And, I have no cholesterol problem.”

An inside retail sales rep for a-construction tool manufacturer where he’s held a variety of different sales and logistics positions for 34 years, Jim says his customers no longer recognize him. “In my work, I don't see some customers sometimes for six months and I would say hello to them, and they would just look at me. I’d have to take my mask off to show them who I was, which is a good feeling, you know? And then I explained that I did it for health reasons.”

Unfamiliar with Chilton before his surgery, Jim enthused about his experience there. “It was excellent. Everybody did their job efficiently and everything went well. The staff was very attentive to everything.  My wife actually stayed at the hospital at night with me and the nurses were very good to her. They gave her a chair to sleep in and blankets and fed her. It was a very positive experience at Chilton.”

An avid golfer, Jim used to visit Las Vegas once a year with his friends on a golf trip, which got canceled in 2020 due to COVID-19. This year, he says “I’m looking forward to that. I haven't been on a plane since the surgery, so I’m sure traveling is going to be much easier.” And his friends haven’t seen him except for an occasional photo on Facebook, so he knows they will be surprised at the change in him. The one thing they won’t find surprising, Jim says, is his golf game. “I was terrible at it before and I'm terrible at it now. I just don't get as tired.”

Jim says if anyone is contemplating bariatric surgery, “You’ve got to be ready to do it because you do have to make changes. It’s not automatic. It doesn’t just happen. You have to eat differently. But it’s a great tool to help you not overeat. I literally don’t eat pasta. I haven’t had pasta in a year and a half, and I don’t miss it because of the benefit that I’ve achieved health-wise. And I just eat less of everything, I walk, which I didn’t do, and I try to get out and play golf as much as I can.”

I am no longer considered a diabetic, so that’s fantastic.